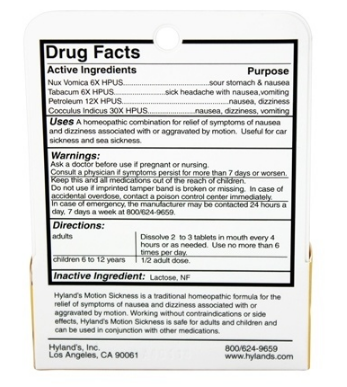 Hyland's Homeopathic Medicines are manufactured according to the standards set forth in the Homeopathic Pharmacopoeia of the United States. They offer unique formulations and use only the highest quality materials in the preparation of their products. Hyland's product line spans 3,500 items - from single remedies to combination medicines.

George Hyland was the first of many pharmacists to lead the company bearing his name. His passion for safe & natural medicines that bring swift, effective relief is still the driving force at Hyland’s today. In 1903, the year Hyland’s was founded as a Los Angeles pharmacy, homeopathy was standard medical practice in the United States. During the first half of the century, despite the medicine’s effectiveness, cultural and political factors pushed it from the mainstream.

Throughout the decades Hyland’s never lost sight of the need for natural medicines that were strong in relieving symptoms but gentle in the way they worked. Nor did the company lose touch with the many insightful doctors and pharmacists who dispensed the medicine, or with the consumers who continued to use it and benefit from it. As countless conventional medicines developed by others proved to produce negligible, complicated or even harmful results, the need for natural medicines that work without side effects is increasing and homeopathic medicines are moving back into the mainstream.

The active ingredients in Hyland’s homeopathic medicines work by stimulating the most effective healing force known - the body's own natural defenses - and are therefore not heavy or overpowering. The medicines are virtually free of side effects and can be taken by nearly anyone at any time, from infants to the elderly, including anyone taking prescription medications.

In addition to its century-long commitment to make safe & natural homeopathic medicines readily available, Hyland’s has been a leader in innovations that answer the changing health needs of the modern world. Hyland’s Teething Tablets, Calms Forté, Sniffles ‘n Sneezes 4Kids, Restful Legs and many others are popular “combination” medicines that focus the power of homeopathy on a particular set of symptoms. Hyland's pharmacists developed each one by carefully selecting a few specific homeopathic ingredients from among thousands, and combining them in effective medicines. Hyland’s array of combination medicines provides relief from the symptoms of most common ailments.