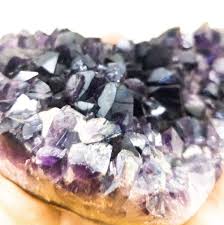 Amethyst has been highly esteemed throughout the ages for its stunning beauty and legendary powers to stimulate, and soothe, the mind and emotions. It is a semi-precious stone in today’s classifications, but to the ancients, it was a “Gem of Fire"; a Precious Stone worth, at times in history, as much as a Diamond. Amethyst has always been associated with February, the month the Romans dedicated to Neptune, their water-god. Therefore, it should be no surprise that it is the traditional birthstone of that month. It is the stone of St. Valentine and faithful love and signifies ecclesiastical dignity as the Bishop’s Stone. It carries the energy of fire and passion, creativity and spirituality; yet bears the logic of temperance and sobriety.

Whether its crystals are left natural, polished as tumbled stones, or faceted into magnificent jewels, Amethyst is a gem whose beauty transcends its commonality. It is a variety of Quartz found in many locations around the world. It forms as transparent, terminated crystals of all sizes in geodes, clusters and as long single terminations. It is also found in vitreous masses and polished into wonderful specimens and personal talismans. The presence of manganese in clear Quartz produces Amethyst, while additional amounts of iron vary the purple coloration. Amethyst ranges in hue from pale red-violet to deep violet and may be transparent or opaque. In addition, it is sometimes layered with white Quartz as Chevron Amethyst, found in combination with Cacoxenite, mixed with Citrine as Ametrine, or in rare cases, “rutilated” with Goethite.

The name Amethyst is derived from the Greek word ametusthos, meaning “not intoxicated", and comes from an ancient legend. The wine god Bacchus, angry over an insult and determined to avenge himself, decreed the first person he should meet would be devoured by his tigers. The unfortunate mortal happened to be a beautiful maiden named Amethyst on her way to worship at the shrine of Diana. As the ferocious beasts sprang, she sought the protection of the goddess and was saved by being turned into a clear, white crystal. Bacchus, regretting his cruelty, poured the juice of his grapes over the stone as an offering; giving the gem its lovely purple hue.

Throughout history, the special virtue of Amethyst has been that of preventing drunkenness and overindulgence. Ancient Greeks and Romans routinely studded their goblets with Amethyst believing wine drunk from an Amethyst cup were powerless to intoxicate, and a stone worn on the body, especially at the navel, had a sobering effect, not only for inebriation but in over-zealousness in passion. Catholic bishops also wore Amethyst in a ring to protect from mystical intoxication. Kissing the ring kept others from similar mystical intoxication and kept them grounded in spiritual thought.