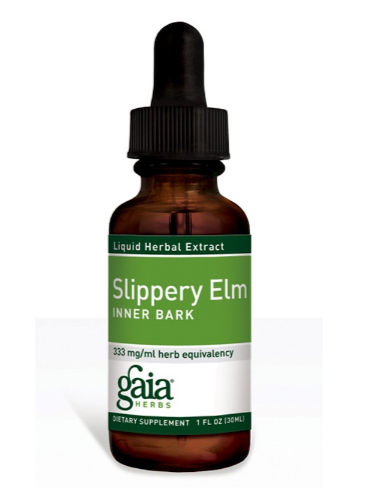 Gaia Herbs no longer makes any products using Slippery Elm, due to its "at risk" status on the United Plant Saver's list. It is endangered due to overharvesting and to Dutch Elm disease which has taken out many of the once very prolific Elm species. Since the inner bark of Slippery Elm is used, harvesting the tree can kill the tree, and Slippery Elm should not be used from wild-harvested sources. Slippery Elm is related to the American Elm (Ulmus americana) and is sometimes also called Red Elm or Moose Elm. It can reach up to sixty feet in height and is native from Quebec to Florida and extends west to the Dakotas and Texas. The name developed due to the mucilaginous inner bark which pioneers in North America chewed for quenching thirst. Slippery Elm was official in the United States Pharmacopeia from 1820-1936 as a demulcent and used in poultices for gunshot wounds by physicians during the American Revolution. The yoke of the Liberty Bell is made from Slippery Elm. It is important to note that American settlers learned about the uses of this tree from Native Americans.